Here, the “City of Ottawa” gets edged out by the “Show Boat” team to finish dead last.

The second image is a winning duo slinging burgers for the cause. 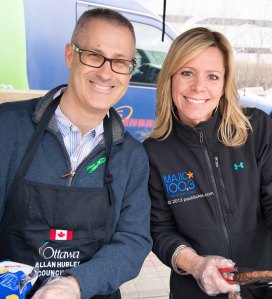 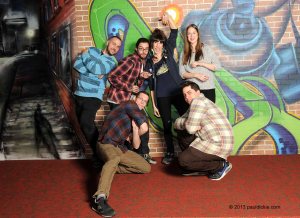 The 2013 Ferguslea Sens Soirée raised $255,000 in support of the region’s children and youth. Monies raised will support the Sens Foundation and their initiatives with youth mental health and addictions, pediatric healthcare programs and outdoor community rink construction projects.

More than 700 guests along with Senators players, members of the coaching staff and management, attended this year’s event, which was themed Graffiti, at Gatineau’s Hilton Lac-Leamy. The players and their significant others hosted a variety of games while interacting with guests during the cocktail reception. Graffiti artists and entertainment groups Ottawa Urban Arts, DJ Calkuta, DJ J.E.T.S. and the Breadcrumb Crew provided the entertainment.

Ottawa Urban Arts (OAU) made up entire walls of graffiti on faux brick, worked on 4 canvases during the reception and created 2 large canvases on stage as guests enjoyed dinner, all of which were donated to the event. Today’s pic is of the entertainment groups hamming it up in front of one of the creations by OUA.

The sens take on the event can be seen here:
http://www.sensfoundation.com/en/default.asp?sensfoundation=234&urlkeyword=Sens_Soir%E9e