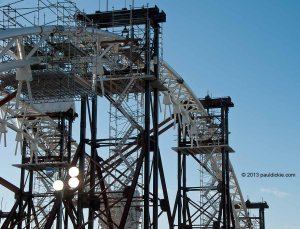 What may appear to be a roller coaster is actually the Strandherd-Armstrong Bridge under
construction.

Population growth in the South Urban Community (both Barrhaven and Riverside South)
continues to increase causing congestion and delays on the current Rideau River crossings at Hunt Club Road and on Bridge Street in Manotick. The new bridge has been subject to several delays including a restart due to the original contractor declaring bankruptcy. Originally scheduled for completion in 2012, the Aug. 31, 2013 deadline is being pushed back as well.